In defense of a certain garden vegetable

If you watch the Office, you know that the shmucky, butt of all jokes is Dwight Shrute.  He’s not only the office brownnoser, he’s a proud owner of a beet farm.  Beets seem to add to the comedy of his character and punctuate his pathetic life.  Well I’m here to come to the defense of a certain garden vegetable.
These are beets: 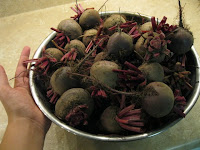 Bulbous and burgundy.
You probably already have an opinion of beets stemming from a horrible childhood memory. Get over it.
How do they taste? Well, beet roots have a natural sugar to them – they are sweet and earthy. Cooked, their texture is like that of a cooked carrot.

Unlike some other red plants, all parts of the beet are edible. Beet roots, as you can probably guess by their vibrant color, are rich in nutrients. Most notably, beets are high in folate, manganese, potassium, fiber and vitamin C. Beets are also especially high in anti-oxidants and have anti-inflammatory properties. Because of this powerful combination, some research suggests that consumption of beets reduces risk of some cancers. Beet greens are also edible and contain large amounts of vitamins K and A, along with large amounts of anti-oxidants. 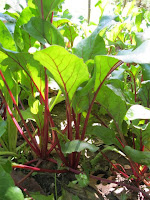 When at the store or farmer’s market, choose beets that are small and firm with unblemished skin and bright green leaves with no sign of wilting. Avoid large beets which have a hairy taproot as they tend to have a tough, woody center. Smaller beets will be sweeter and more tender.  Once you’ve brought them home, if you’re using the greens, use them quickly or cut them off a couple of inches above the roots. 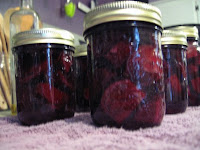 My husband and I grow hundreds of beets each year and have just started to harvest our spring crop. We pickle and can a good percentage of the beets so that we can use them in salads and give as gifts throughout the year.  In North Texas, you can grow beets twice a year and get great results.  All you need is a plot of sunny, well amended soil, some funky looking seeds and a watering can.
So, I hope that I’ve convinced you to try these blushing beauties again.   If you have any questions about how to prepare or grow these delicious and nutritious beets, leave a comment with your questions!
Posted by Sheena Elenbaas, LMT at 9:31 AM No comments:

Just Beet it! Beet it, ooh!

Okay, so this week has been sort of a "beet" down, time wise, so I haven't been posting much of anything or cooking as much as I'd like.  So, I thought I'd post an old meal (as in...we didn't really eat this dish this week).

Have you ever done anything with beets besides cooking them and throwing them in your salads?  I love to find new things to do with beets, so leave me some recipes if you are so inclined.

This is a salad best served cold.  So, if you roasted beets ahead of time and refrigerated them, that's great!  Otherwise, roast some beets pronto!  You do this by preheating to 400, washing and trimming the leaves off the beets and roasting with olive oil and salt and pepper for about 40 minutes, or until tender enough to be pierced with a knife. 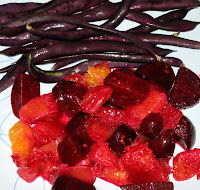 Whisk all but orange and beets together.  Add oranges and beets.  Chill, serve. Viola!
Posted by Sheena Elenbaas, LMT at 7:59 PM No comments: 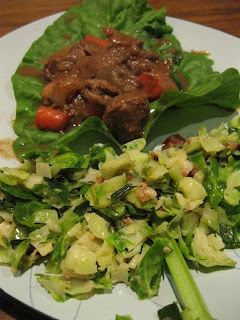 Catchy title, huh?
I try not to be irrational with my pickiness when it comes to food.  Every few years I will try a piece of ham and I will try cherries.  I always regret doing this and end up looking like a dog trying to lick peanut butter off its jowls, but every once in a while my food tastes change.  I have rediscovered so many things over the years that I had never liked before.  I hated brussels sprouts as a kid.  In fact, I thought I hated them until last year.  What gives?  Do you feel like you're a hater?  Try this recipe out.
Shredded Brussels Sprouts (Serves 2-3)
~15 brussels sprouts - cored and chopped
A small handful of crumbled bacon- optional
garlic, chopped to taste
2 green onions, chopped
Cajun seasoning, to taste (about 1/4 tsp?)
About 2T olive oil

Heat olive oil over medium heat. Add all ingredients and saute for about 15 minutes.  Bam.

I served this over a gigantic swiss chard leaf from the garden and some beef.

Have you ever made a pot roast with red wine? Well, let me tell you that if you make it with Guinness instead, it will rock your socks.  Here's the recipe: http://www.foodnetwork.com/recipes/beef-and-guinness-stew-recipe2/index.html
Posted by Sheena Elenbaas, LMT at 8:55 PM No comments:

And a side of radish 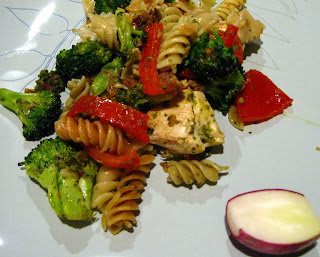 In a pinch, you can make anything happen if you have some staples in the house.  For me, this includes, but is not limited to pasta, frozen pesto (homemade from last year - still good!), chicken breast and red bell peppers.  I always try to keep these things in the house.  Last week I pulled this gem out of my bag-o-tricks because I was in a hurry to go to a short seminar presented by the North Texas Chapter of the Texas Association of Massage Therapists.
Veggie Pesto + chicken
1 broccoli crown, chopped
1 red bell pepper, chopped
2 small tomatoes, chopped
2 "ice cubes" of pesto, thawed*
2 cups of pasta, whatever
Some bacon bits
1 chicken breast, grilled and cut in bite sized bits
About 2T of Olive oil
Salt & Pepper, to taste
Heat the olive oil over medium heat in a pan large enough to fit all of your veggies and chicken.
Add broccoli and bell pepper and saute for about 5-8 minutes, until the broccoli is super bright green and al dente.  Add in all other ingredients, let cook until the veggies are "done enough," taste, season some more if needed, then serve.
*Ice cubes - I make my pesto in a large batch whenever the basil is ready in my garden.  Then I pour the pesto in a large ice-cube tray (close to an ounce each cube) and freeze.  After it's frozen, I plop those puppies out of the tray, put them in a freezer safe bag, and store them in the ice-box until I'm ready for them.  The recipe I use for the pesto is here.﻿  Oh, and don't let anyone tell you that you can't freeze pesto with Parmesan in it.  BS.
Posted by Sheena Elenbaas, LMT at 4:24 PM 1 comment:

Every year I have a bounty of radishes and I never know what to do with them, besides shock my sinuses. Turns out that there's a limit to how many spicy radishes that I can eat raw. So, salad toppings aside, what can you do with radishes?
Let's back up for a second. Why do I grow these enigmatic roots? Well, first of all, they're fast and easy. I plant them between rows of other vegetables because the time from seed to maturity is half or more of other veggies I grow. Also, they're said to be a natural pesticide (maybe because of their fiery quality?). Beyond the ease of growth, radishes offer Vitamin C, potassium, and folic acid. They also stimulate liver function and digestion. Though I love the spicy varieties, there are some milder radishes out there for you non-fire-breathers.
Last night I tried something beyond salad with these radishes...I cooked them! I've never cooked radishes before. I decided to throw my entire kitchen into a sautee pan. It turned out pretty good! I will make some changes next time, but this was a good start. 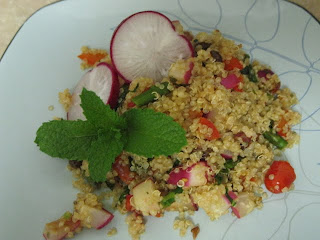 Bring quinoa, raisins and water to a boil, then reduce to a simmer, cover and cook for 12-15 minutes, until water is absorbed. In the meantime, sautee bell pepper, asparagus, bacon for a few minutes, then add in the other ingredients. Combine sauteed mixture with quinoa, garnish with extra mint and radishes, and serve.

Alas, I picked too much mint. So, naturally, I had to make a strawberry-mint mojito for dessert. 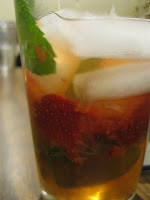 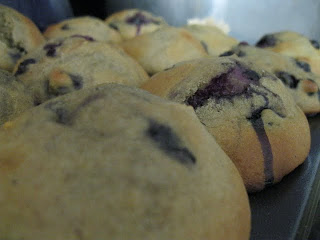 "My muffin top is all that
Whole grain, low-fat
I know you want a piece of that,
But I just want to dance."
Yes, I just quoted Jenna from 30-Rock.  I couldn't help humming the song while baking this afternoon.  This weekend I'll be driving out West where it's wide-open and wanted some semi-healthy snacks for the trip and the hike.  Evidently, there's a burn ban and a charcoal ban at the park we're going to, so I've had to think creatively.   No campfire potatoes and veggie roasts.
My solution?  Cold pizza (yikes!, but yum!), tarragon chicken salad sandwiches, blueberry muffins and granola bars.
Here is the muffin recipe I used; I have adapted it dramatically, so I'll post my version here.
Blueberry Muffins
4 eggs
1.5 cups  agave nectar
1 cup apple sauce
2 tsp vanilla extract
4 cups flour (I used King Arthur)
1 tsp salt
1 tsp baking soda
2 cups greek yogurt, plain
3 cups frozen or fresh blueberries
1.5 Tbsp cinnamon 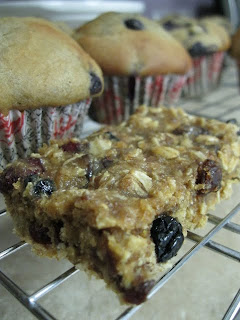 Directions
1. Preheat oven to 400 degrees F. Grease 24 muffin cups.  Don't use paper liners.
2. In large bowl beat eggs, gradually add nectar and apple sauce while beating. Stir in vanilla. In a separate bowl, stir together flour, salt, cinnamon and baking soda.
3. Stir dry ingredients into egg mixture alternately with yogurt. Gently fold in blueberries. Scoop batter into prepared muffin cups.
4.Bake for about 25 minutes until a toothpick comes out clean.
The last granola bars I made were no-bake and had Karo in them.  I really wanted to stay away from corn syrup, so I found an alternate recipe.  This recipe can be found on AllRecipes.com here.   I did make a few modifications:  I used half flax-seeds and half-wheat germ.  I used half apple sauce and half oil.  I used more cinnamon than specified (about 1.5 tsp).  Also, bake for about 20 minutes, not 30.  Both recipes turned out nicely.
Posted by Sheena Elenbaas, LMT at 2:00 PM No comments: 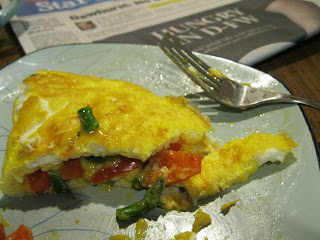 Some days need to start off with a gourmet omelet. Today was one of those days. I took some asparagus and red bell pepper, chopped and sautéed them and then stuffed this big boy with 2% cheddar cheese (which makes me feel better about the fat content... ) and the veggies. Bam. And viola.

Let me know if you need tips on getting your omelet to turn out nicely.

Posted by Sheena Elenbaas, LMT at 3:44 PM No comments: